Skip to main content
You are here: Warning of possibly harmful website or software - How to deal with it?

Warning of possibly harmful website or software - How to deal with it?

While you download software applications from the internet, when you try to run them, Windows or your Antivirus software might give you some warnings or even block the application from running. Common types of warnings are the following:

Which software is showing these warnings?

It might be your antivirus software, your internet browser, or the operating system that generate these warnings.

For example, Windows 8 and Windows 10 come with Microsoft Defender and SmartScreen which monitor the websites you are visiting and the software you download. They might issue warnings about certain application files. Unfortunately, this happens mostly for the software of small developers as their software applications are not so frequently used as the software of the big software developers.

If the warning a false alarm or a true threat?

If you receive such a warning from your internet browser (Mozilla Firefox, Chrome, Safari, Microsoft Internet Explorer, Microsoft Edge) or by your antivirus software, you have to decide if this a "false positive" (false alarm) or a true threat.

If the warning message has the name of a specific virus, then you should probably not proceed. If the name of the virus contains the word "generic" then probably this is a guess from the antivirus program and is possibly a false positive. You should inform the publisher/creator of the software and ask for their advice.

Microsoft Edge does not give any more arguments, why this file could harm the computer, and proposes to delete this file.

To keep the file, press the 3 dots and select "Keep".

Going further, after you selected to keep the downloaded software app, Microsoft Defender SmartScreen comes on and might throw the message "This app might harm your device".

The reason for this warning is that the app is not commonly downloaded or is not signed by its publisher. (In our case, we sign our StarMessage Screensaver since the 5.9.3 version).

So, there is something wrong with the contents of the file itself. The warning is issued only because SmartScreen has not statistically seen many downloads of it. This is a hit to the small, independent developers. 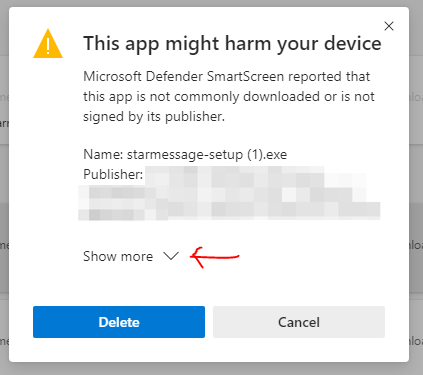 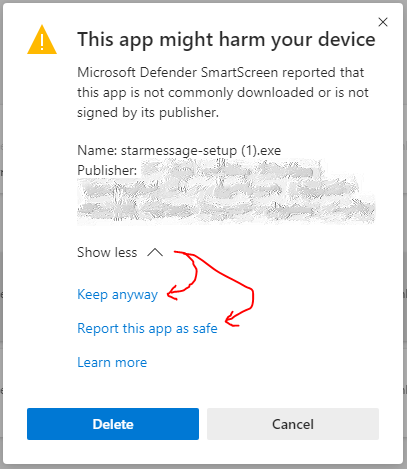 If you trust and want to help the maker of the software, you can report the app as safe. If enough users do that, the warning will eventually be removed.

Finally, the software application download will be available under your Microsoft Edge downloads.